In an interview earlier in December, I was asked:

The first few pieces of work are quite harrowing in my opinion.

Do you think we will be seeing work that reflects hope?

"They are, aren’t they! But that was the sentiment and temperament of the artist at the time of creation no (not to criticise but to point out the authenticity of the work as a reaction or a representation of what is happening with the artist internally). The later submissions were less “harrowing” in my view. So yes, hopefully the later ones will sound like hope (I’d like that too!). It will really  depend on how this pandemic journey will progress or end. [with minor edit]

Listening to Tintin's composition brought me back to that interview. The message that this work brings to us is not any less harrowing that the earlier ones. Truth be told, it is even more distressing. Ignorance and arrogance have been proven a lethal combination. But the manner that the artists chosen to present, employing humour, sarcasm, a good dose of playfulness, gives us a feeling of a new morning-- that finally, it is not as dark nor as cold as it seemed the whole year. We are now in the place where we are getting back our faculties to live another day, and not simply to survive one.

It is in this hopefully note that we have chosen to launch Tintin's "I HAD WAY MORE DIRTIER THINGS IN MY MOUTH".

I HAD WAY MORE DIRTIER THINGS IN MY MOUTH is a comment on Corona naysayers’ conspiracy theories, fake news and the viral aspects of spoken language. It’s based on data measuring the amount of aerosols spread while breathing and speaking in an unventilated room during 4:54 minutes.

Each of the 4 performers chooses his/her own instruments/sound sources, each performer chooses 1 of 4 available aerosol-symbols as an personal indicator to produce sound. 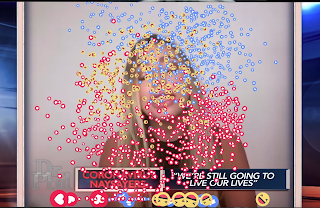