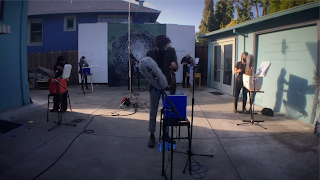 1. I’ve always emphasised the importance of reflecting on one’s process, especially when doing art. It is when mindfulness is not ‘on the thinking’ but ‘in the being’.  It is the part of art that can’t be owned by anybody else except those who are part of the making. An approximation of it though can be recalled and shared. Below is a portion of an email from Chris (with his permission), as he shares how the performance/ recording “(US) Going Under” came together.

This project is what it is because of the success of all its collaborations — beginning with your charge to the artists — your topic was an apt challenge for these times, and for everyone here who participated it made sense and they just wanted to do it!

The Toer text jumped out because I’m currently in vol 4 of reading the Buru Quartet, and his-story and analyses have been a lens for me in living through the Black-Lives- Matter movement this summer.

Collecting the performers was a delicate task, because many of my musician friends are still too worried to play together in person, even while all would dearly love to play too. So the most work on the project was in designing the way we could perform it — our courtyard in back of the house was just the right outdoor space to fit the masked ensemble — I insisted on putting the 6 states in their accurate cardinal positions in relation to the sun, to put us in sync with planetary proportions — there was no rehearsal for the performers, so that we could begin and end the event within one hour, as I had promised them — for Brenda  that was particularly important, because she also has maintained for many years a ritual of ringing bells at every sunset and she needed to change modes to maintain that ritual. Brendan (front-middle) is a composer and technical director at Center for Contemporary Music at Mills, whose audio- video works are also very much aligned to environment and text. Sudhu is a Mills educated composer/performer and instrument-builder — his partner Carly  (with braids) is an excellent photographer — and Anne  is a composer and electronic engineer who studied (including gangsa) at UP Diliman. So the personalities all fit together and everyone just focused on the tasks at hand — our audio recordist Phil is an audio angel whose day job doing sound for video commercials funds his art which includes recording so many Bay Area performers in their own locations.


And of course, this is also Johanna’s  piece, not only for her beautifully shot and edited video documentation, but for her advice all along the way putting the ensemble together, designing the set, and being the voice within the gangsa flows — she also wrote and spoke the poem that responds to the Toer text. As videographer, she’s not seen in the documentation, but her vision is what we see.

Finally, the gangsa themselves continue to provide us with a continuing source of community and spiritual sustenance. They are the magic themselves. It was a family connection from a Bay Area Pinay who bought them for me in the Cordillera and had them carried to US on a plane and delivered straight to my door. They seem to be happy here! The idea of dipping them I learned from John Cage’s percussion music.

After editing the recording I realize now that the dipping techniques we played were not totally accurate to the scores — but really I could care less — it was their focus on doing it and sensitive listening to each other that makes it all work well. 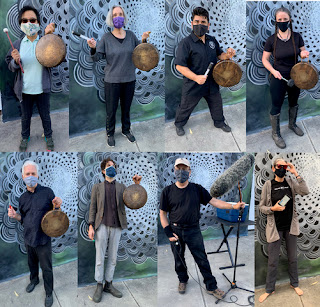