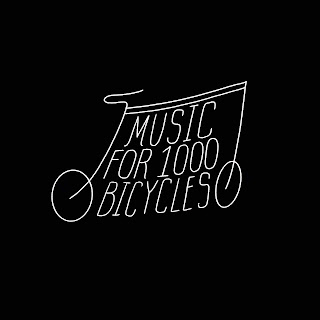 Music for 1000 Bicycles grew and had taken a different shape from when it was released earlier in June. This blog is an update after we posted an invitation possible collaborative partners in May on our Facebook page 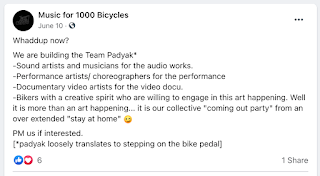 At the moment there are 6 legs: Hamburg (Germany), Japan, San Francisco (USA), University of the Philippines, Diliman/Baguio/Ilolilo (Philippines).

Few details (parameters) of the collab are:

1. The audio work that is going to be produced has to be inspired by outdoors sound experience that are moving (rainfall, flock of birds, traffic, train, etc). This is an attempt to amplify the outdoor sounds; sounds that became too distant or too rare to us when pandemic lockdowns started.

2. There has to be an identified route or site that will be the basis of the composition. Since this is an outdoor performance, the sound within the site of performance has to be considered by the composer. This site will be the basis of the choreography of the moving bodies (bike riders). And this identified site will make video and sound captures for documentation easier to manage.

3. It is possible that the composition, choreography, and performance will considered 3 different phases.

4. There will be rehearsal rides, where only proponents (and a small number of invited friends) can participate. The purpose of rehearsal rides is to test the composition and choreography in situ, which will give the artists spatial insight necessary to improve their work. Tentative schedule: September 2021-February 2022.

6. A documentary video featuring all rides (including rehearsals) is scheduled to be be released in May 2023.

Music for 1000 Bicycles-Hamburg is from the original collaboration with TinTin Patrone (blogs below), as part of our residency with Goethe Institut. 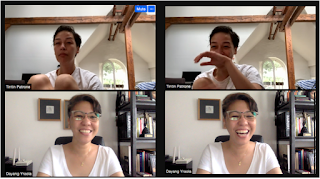 TinTin and I are currently surveying our individual and shared sound banks (physical and conceptual) while we get ready to determine the story we wanted to tell in our Hamburg rides.

On the sideline, while our residency is only focused on producing the music for the project, we have already invited other artists to consider joining our team for the possible staging next year. Some have already committed. We will introduce them in the coming project updates. 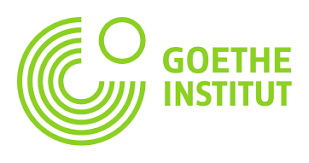 Music for 1000 Bicycles-Japan takes the same form of the one for Hamburg. I will be working on an exchange residency with a good friend and composer, Makoto Nomura. 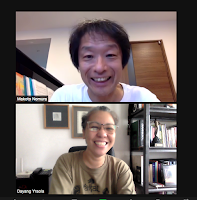 We are also exploring possible partners and support for staging the performance. Makoto and I agreed that we will use Japan in the project instead of a particular city (e.g. Kyoto, which was my original plan), to allow possibility of doing this in different cities in Japan. We hope to introduce them in the coming project updates.

This collaborative virtual residency is supported by the Japan Foundation Manila. 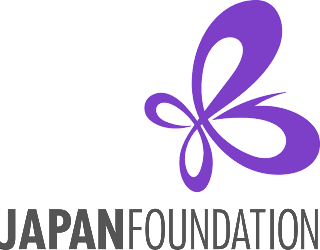 Music for 1000 Bicycles- San Francisco is a partnership with artists Johanna Poethig, Mike Arcega and composer Chris Brown. The production strategy for this leg is still being studied. But their commitment is solid.

The group already did a trial ride in June, which is most helpful for all of us, as it is now being used as reference in imagining our future performances.

This leg is being prepared to include all phases of production from compositions, choreography, performance and production of documentation.  We are also partnering with local artists, allied organisations and local government units to ensure a more efficient implementation and to maximise the potential of Music for 1000 Bicycles as a community project. We will introduce them in the coming project update.